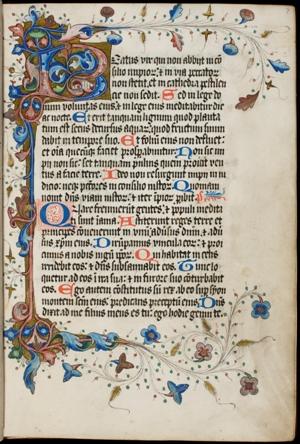 A prayer book in Latin comprising the canon of saints, antiphonal psalms, Song of Songs, and the Divine Office for the Dead according to the Use of Sarum (Salisbury liturgy). This book is thought to have been produced in London in the mid-15th century, since it lists the date of death for a person who is speculated to be Johann Aspiron, the head of a monastery in London, as well as employing a design of acanthus patterns in lustrous gold for the decorative lettering, which was the fashion in London. It is also known that the work of producing the manuscript was shared by three scribes due to differences in the writing style. The main text was written in Anglicana Formata script, and is believed to be the work of scribes who had undergone their occupational training at workshops in London. [120X@582@1]