Hebrew Torah and a large silver and gold semi- and original precious stone sat Torah case, latter half of the 18th century 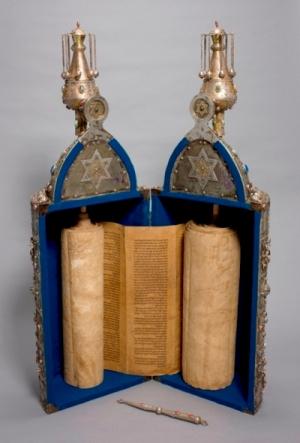 A manuscript of the Hebrew Torah (first five books of the Old Testament) with a case that originated from Bukhara (Uzbekistan) in the latter half of the 18th century. The manuscript is written on parchment made from deerskin. The case is silver-plated brass encrusted with precious stones such as turquoise and rubies. The design is of religious icons such as menorahs (seven-branched candlesticks) and grapes. At both ends of the case are words written in Hebrew explaining the Torah, and it comes complete with a bell called a "rimonim" (pomegranate) that is attached to the top of the case as well as a yad, a ritual pointer, used when reading the manuscript. During worship at a synagogue, one of the main rituals is to remove the Torah scroll like this document from the ark, present it, and then read it aloud to the congregation. In Judaism, which is known as the "religion of the book", study of scripture developed in order to act in observance of what has been written without error, and a vast body of religious precepts formed. The Torah manuscript is apotheosized as the foundational text, and it was decided that specially qualified scribes (soferim) were to transcribe the text in accordance with a strict set of rules. In addition, a group of scholars called the Masoretes was formed to maintain the authenticity of these manuscripts. [140X@48@1]