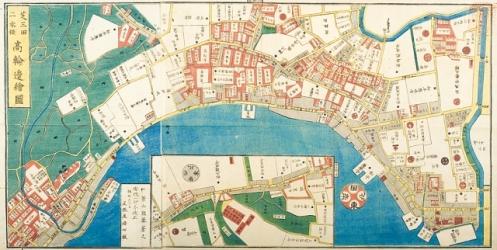 A map of the Shiba, Mita, and Takanawa areas at the end of the Edo period. Most of the white areas that stand out across the map indicate the residences of feudal lords. The white triangular area about a quarter of the way in from the right is the secondary residence of the Matsudaira family, which served as directors of the Palace Keeper's Bureau, and is now the location of Keio University's Mita Campus. The semicircle at the bottom of the map represents the sea, and the word "Sengakuji" can be seen directly above the coastline in the center. The area in the bottom left that is built up with houses is Shinagawa-shuku, which at the time was a post station that thronged with travelers coming and going along the old Tokaido highway. This Owariya-edition "Edo kirie-zu" comprised of 31 illustrations in total, which were published sequentially from 1849. The complete map covers almost the entire Edo area (excluding suburbs). In this way, "kirie-zu" refers to illustrations created of a large specified area, which are split into parts. Compared to one large map, kirie-zu were easy to carry and handle, and it is thought that it was also easier to incorporate more information. Although there are also Kichimonji and Kingodo editions of "Edo kirie-zu," the Owariya editions were repeatedly supplemented and reissued up to the beginning of the Meiji period, and many prints are still extant. As a result, the drastic changes from the Edo to Meiji periods can be seen through these illustrations. [127@9@25]