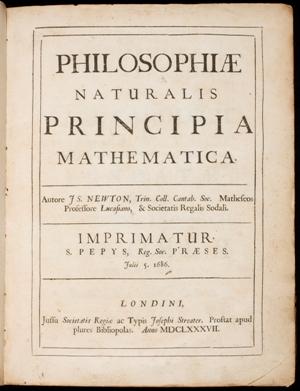 A book that systematically explains mechanics by Isaac Newton (1642-1727), who laid the foundations of classical mechanics. It is considered the culmination of Newton's research, as it unifies the relationship between the motions of objects and forces through universal gravitation and the three laws of inertia, acceleration, and action and reaction This book is also well known by its abbreviated title of "Principia", and is regarded as one of the most important books in modern science. The research methodologies and systems of the modern natural sciences were mostly completed in the 17th and 18th centuries; however, it was Newton who laid the foundations for this and he greatly influenced later generations. [120X@627@1]