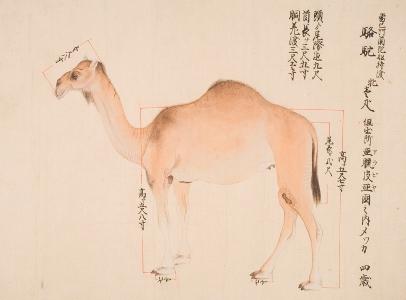 In the Edo period, drawings of birds and beasts brought from China and the Netherlands would first be prepared in Nagasaki and sent to Edo, which the Shogunate would then check before having any animals deemed necessary sent to the capital. In the Kanbun era (1661-1673), the Takagi household, which was tasked with reporting the birds and beasts that arrived in Nagasaki to the Shogunate, had the goyo-eshi (official government painters) draw pictures of the rare animals that arrived, prepared a request for orders, and then sent these to Edo. Additionally, one copy of each picture was kept at the household as a record. The booklets are illustrated catalogs of these pictures that were collected from mounted scrolls in the Meiji period. There is a total of 225 illustrations depicting animals from the Kanpo to the Kaei era (1741-1854), and the 5 booklets consist of 4 types of catalogs: illustrations of beasts, illustrations of dogs, illustrations of horses, and illustrations of birds. Although it was known that many birds and beasts were brought to Japan from foreign countries during the Edo period, there was hardly any concrete evidence of the names of species or the years they arrived. These booklets are valuable materials in the history of natural history, and they sparked significant revisions of the history of animals brought to Japan in the Edo period. Donated by Yasuzaemon Matsunaga in 1957. [132X@166@5]